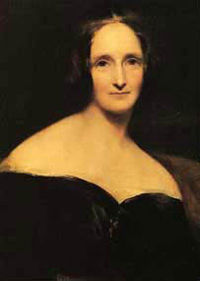 Not many people know this, not that it’s a secret or anything, but I have a website about Mary Shelley and Frankenstein that has been online since 1996.

by Mary Wollstonecraft and discovered that she was Mary Shelley’s mother. I became fascinated in the often shocking life of Mary Shelley (I’m actually not a huge fan of the novel due to it’s readability but it is ground-breaking) and when I learned html in 1995-1996 I decided to make a website about Mary Shelley and Frankenstein to practice my new skills and use a topic in which I was interested.

The first version of the site was called Mary Shelley’s Private Frankenstein Musical (the name later changed to The Mary Shelley and Frankenstein Resource Center). It had a black background, all of the text was centered, and I had auto-playing midi music. At the time it seemed like the height of technology but I am so glad I was doing that in 1996 and not 2006. It existed on my web space on my ISP so I had a URL like http://myhost.com/~kwbridge (remember those). I don’t have a copy of this monstrosity and searched the wayback machine but couldn’t locate a version of it. It looks like as the site got moved around that I added redirects to the new URL and those got archived rather than the site.

Eventually the site started getting too much traffic to be on an ISP ~ domain so I had to buy a domain name for it and get a real web host. For whatever reason, I didn’t initially buy kimwoodbridge.com I bought desert-fairy.com – wacky. I’m not sure what exactly I was thinking but I was considering a site about fairy tales, which I never did.

I wrote essays, answered a lot of emails, and spent time editing essay submissions. For some time, it was the Mary Shelley and Frankenstein go-to site. Around the time my daughter was born or slightly before, I started to lose interest. The site was existing at kimwoodbridge.com/maryshel but it was stagnant and I didn’t update it for almost a decade.

The last incarnation of it before I moved the site into WordPress, looked like this: 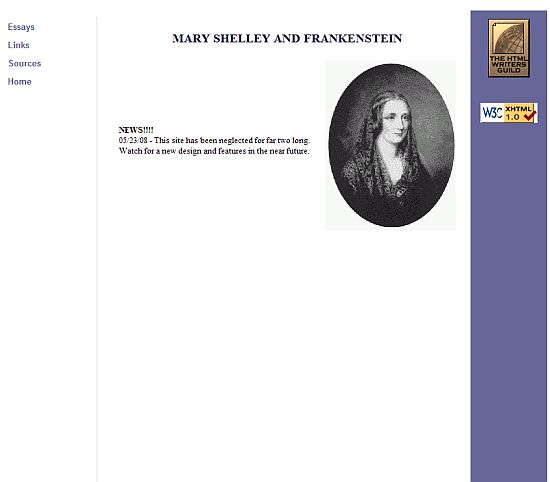 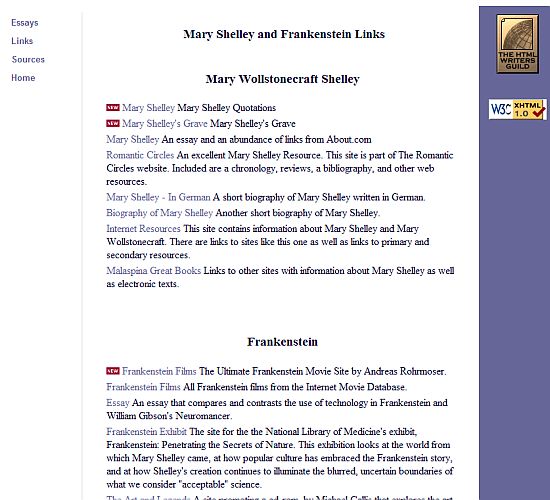 I love the little ‘new’ images the fact that I was proud of being in the HTML Writer’s Guild ;-). Although I did know enough at the time to use .shtml and include files so that a change to the sidebar or the footer didn’t require a change to every single file.

About a year or so ago, I realized that even without me doing anything on the site that it was still getting quite a bit of traffic and searches on certain keywords such as ‘frankenstein essays’ were producing first place results in google. I had put a lot of work into this at one time and decided it was time to get a new domain name for it, put the content into WordPress, and monetize it.

So, I bought the domain marywshelley.com, slightly custmomized an existing theme, and moved the content over. The new site looks like this: 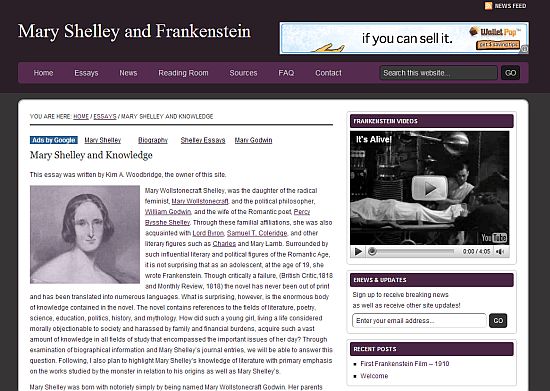 In part 2 of this article, I will discuss the logistics of transferring a static site to WordPress as this turned out to be a history of my involvement with Mary Shelley and Frankenstein online.