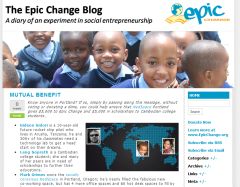 Epic Change is one of the May 2009 finalists who could win $10,000 toward implementing their idea!! It would be awesome if you would head over to Ideablob and vote for them. A free registration is required but you won’t be spammed. Taking a couple minutes of your time will really help out Epic Change.

And what does Epic Change plan to do with the money if they win? They are working on expanding a primary school in Tanzania and ultimately want to add a technology center for the kids. Wouldn’t it be great for the kids to have access to technology that we take for granted?

And what does Epic Change do? They raise money from people like us primarily via social media. They loan it to people like the villagers in Tanzania and then assist the recipients of the loan in creating a related product that they can sell to raise money to repay the loan. Once the loan is repaid, the money is then used it in a pay it forward style to benefit the next group of recepients. Cool, huh?

Stacey Monk is the wonderful person behind this organization. You can follow her on twitter @staceymonk and fan Epic Change on facebook to stay on top of what the organization is up to.

I met Stacey completely by accident on Twitter. I was searching on WordPress and she sent out a tweet about needing help. I responded, helped, and have since become someone Epic Change can turn to when they need WordPress assistance.

So, please take a couple of minutes, register at Ideablob and vote for Epic Change and the primary school in Tanzania. Voting ends on Sunday May 31st so don’t put it off – do it now. :-)

This blog post is part of Zemanta’s “Blogging For a Cause” campaign to raise awareness and funds for worthy causes that bloggers care about.

Keep Reading:
How to Get Freelance Work with Twitter
How to Create a Custom Facebook Fan Page
How to Post Status Updates and Photos to Facebook Via Text Message
What to Read Next: Goodreads Recommendations Can Help