David used the twitter feeds, excluded news sources such as the BBC or feeds that were solely blog postings, and aggregated them using Yahoo Pipes. The purpose of this was to create a discussion of environmental issues. By doing this not only did he attempt to create the conversation but he also created a feed that he was able to post on the sidebar of his blog. 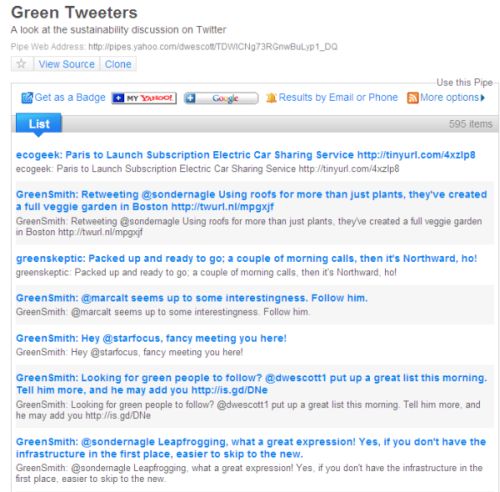 Do I have a solution to this? No, I don’t. I am not sure how to filter out the “noise” and create an aggregated twitter feed that is only on one topic. But, then, I am certainly not an aggregation or filtering expert so maybe one of my readers can point me in the right direction. Does anyone have any suggestions or ideas?

And thanks to David’s article, I now have some more users to add to the list of Green Twits and to the opml file.

Keep Reading:
Twitter Tools - Managing Twitter Via Wordpress
I am not a Wordpress Exclude Categories Stealth Ninja
Monitter - Embed Live Bigfoot Search Stream Results
Ranking Yourself on Twitter - Does It Even Matter?