Well, you can’t see it on this site because I spent a good chunk of my weekend trying to figure out how to get rid of it, but I’ve come up with three ways to get rid of the word “Says” after the commenters name in WordPress 2.7 threaded comments.

The three methods are:

On wait – you’re in luck – I do have a screenshot from the WordPress default theme in my testing site. 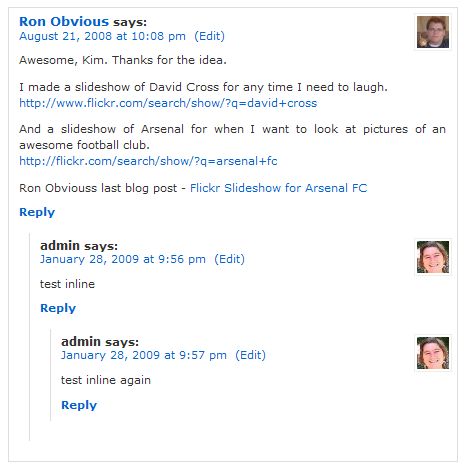 The html output from wp_list_comments creates the Says with the following code:

The first method is a way to tell the code to not show the class via CSS. You can add the following to your stylesheet.

I did not use this method because it caused alignment of other parts of the comments to be all out of wack. I spent way too much time trying to figure this out and could not track down the problem. Interestingly enough, I have not had the same issues when I’ve set these up for other people so it is possible it will only work properly for me when I’m getting paid to do it. Actually, it’s more likely that I have a css conflict because I mess with it so often.

The second method uses the same class and also gets added to your stylesheet file. This makes the word says the same color as your background so it is basically invisible, although it does still exist. You will use the following:

That will make the word Says white, which is my background color. You can set it to whatever color you like. This solution did not work for me either. Most of my comments are in white but my replies as the site author are in green. If you visited my site on Monday you might have noticed the word Says in tiny little white letters on my replies. This solution will work great if all the comments are the same color. I almost removed the green, even though I’ve frown attached to it, until I tried solution #3.

The method that I used was the callback function, which is mentioned in the codex without much explanation and also detailed at ScriptyGoddess.

In comments.php you change

By removing that line from the callback function, says will no longer be part of the comment output. You don’t have to remove it. You can change says to another word or phrase.

This code was contained within the comments.php file in versions prior to 2.7 and it was simply a matter of deleting it from the file.