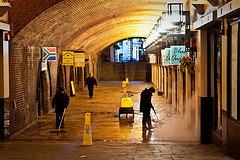 Last November I asked if you backed up your important data. I was having trouble with Windows and did a clean reinstall – I didn’t have too much down time because I have a backup plan for my important files and it was basically a matter of copying them over.

I also backup my websites and client sites. As I was reviewing my client files, I discovered that not only is it important to back up files regularly but that I should also review the data and get rid of files that I no longer need.

If I did work from someone one time three years ago and have never heard from that person again, I think I’m safe to delete the files. I suppose it’s possible, but I’ve never been asked for three year old backup. ;-)

I also had monthly backups for regular clients going back years. I would say a year is probably plenty for backups.

I also have cover letters I wrote for job applications from 1998! I’m pretty sure I don’t need that anymore either ;-)

It’s odd that I’m a bit of packrat with my computer files because I’m not like that in real life. If I haven’t used something in a year, I figure I don’t need it and I give if it away.

Does anyone else remember having a hard drive with 1GB-3GB of space? I had to be more careful with files then because one of the first issues I would run into with my computer was running out of disk space. Now, with such huge hard drives it’s possible to store so much and not have to worry about the amount of space it’s taking.

I’ve decided, however, to review and remove old files on a yearly basis. It becomes unnecessary to hold on to so many files that are never going to be needed.

How about you? Do you weed out old files on your computer? Or do you ignore them the way that I was until recently?

Keep Reading:
Slightly Awkward Family Photos
Get Those Kids off My Lawn
How to Raise a Reader: Children Who Love to Read
Purple Pirates with Pink Skulls