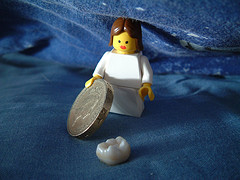 My daughter is really sweet and funny. I know, I know … I’m sure I sound like a biased parent but everyone tells me the same thing so I’m confident that is just her personality.

Recently she totally cracked me up over a conversation she had with her Dad about some dental work he needed done and how she related part of the conversation to Star Wars.

One thing that you should know is that for better or for worse, Star Wars has been a huge influence in part of our lives. I was married to a Star Wars fanatic.

Well, perhaps more of a collector that an fanatic but Star Wars was released at a pivotal moment in his childhood and has never stopped being an influence. This has nothing to do with why we are no longer married – I collect videogames – and I figure a Star Wars habit is way better than a crack habit ;-)

When I was pregnant we didn’t want to know the gender of the baby so we had names picked out for a boy and a girl. Fortunately, we had a girl because we were going to name a boy Luke Harrison ;-) And, fortunately, he didn’t insist on naming a girl Leia.

Alex’s Dad had a root canal about a year ago. He started having trouble with his tooth and discovered that there was an infection at the point of the root canal. The dentist ogden said they could re-do the the root canal or completely remove the tooth. The Dad opted to have the tooth removed and the BDS dentist has him involved in a study for a new type of replacement tooth so Marc will get paid rather than having to pay for the procedure.

Anyway, the conversation he had with Alex about his dental work went like this.

I could not stop laughing when I overheard this conversation and it is still cracking me up. Kids …

Keep Reading:
I Will Read Anything By These 5 Authors
Happy Muppet Memorial Day
What Should I Read Next? Books Read the 2nd Half of 2010
Earth Day Every Day - Urban Composting