Lo-fi librarian mentioned MyJugaad.in, which is a tool to create an online slideshow of webpages. You can use any RSS feed, popular sources such as google news, a tag on del.icio.us, or a list of sites.

It seems as if all my projects recently involve using the Green Tweeter data but since the data is already compiled and the pipes have already been created it is an easy resource to use and the data is interesting and informative. So, I created two slideshows; one for the twitter feeds of the green users and the second is from the rss feeds of the blogs of the green twitter users. 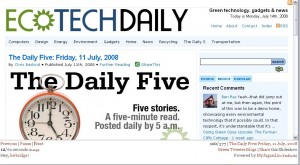 The slide is changed every 60 seconds but that settings can be adjusted. There are also controls for Previous, Next and Pause and the shortcut keys for the settings are shown when you hover over the link.   END_OF_DOCUMENT_TOKEN_TO_BE_REPLACED

In yesterday’s article, Green Twitter Google Pie, I mentioned that I had created additional gadgets from the Green Twitter RSS feed imported into Google Spreadsheets.

The first is a word cloud of the top green tweeters per last 20 tweets – this uses the same spreadsheet data used to create the pie chart. I wanted to create a cloud from the actual tweet but common words such as the and and the most common in the cloud. I don’t know how to remove them. I also don’t like the border around the cloud but I haven’t been able to figure out how to remove that either.

The second gadget is a table of the twitter username and the tweet. What I like about this gadget is that it can be filtered by field. What I don’t like about it that even though the tweets are linked withing the original spreadsheet they aren’t in the gadget


Finally, this is an iframe of the three primary fields from the spreadsheet. This is embedded html and is not a gadget so the tweet url’s are linked. The link will open within the frame but to return to the spreadsheet you have to right click and select back.

There are a lot more things that can be done with RSS feeds within Google spreadsheets. If anyone has any creative ideas, please let me know in the comments.

7/29/08 – Currently, Twitter is not accepting connections from Yahoo Pipes so my second tag cloud is not working. The Yahoo Pipes blog states that they are currently working with Twitter to resolve this issue.

I located a site called Make Cloud, which specializes in creating a tag cloud from RSS feeds and then provides code so you can embed the cloud on your blog or website. Once I tested this with a standard feed, I headed to Yahoo Pipes to work on the aggregation.  END_OF_DOCUMENT_TOKEN_TO_BE_REPLACED