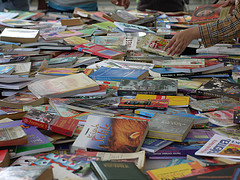 This is the list of books I’ve read the first 6 months of 2011. My goal is 52 books a year but since I read 42 in 6 months I’ve increased my yearly goal to 70 this year. Of course, I’m not reading Joyce or any of the great works of literature – honestly, I can read a lot of the books on this list in a day – especially the ones in the series.

And this has been a year for series. I worked through the Dresden Files series by Jim Butcher, I reading the Jack Reacher books by Lee Child and am on my way in reading every book by Laura Lippman.

I’ve put an asterisk next to my favorites. There a couple on this list that I really didn’t like at all – don’t get me started on The Discovery of Witches. And the list doesn’t include the ones I started and didn’t finish – I usually have quite a few of those by the end of the year. I either couldn’t stand the book and figure life is too short and there are too many unread book to waste my time or I lost interest.


How about you? Got any recommendations from some great books you’ve read this year? Read any on this list that you loved or hated? I am on Goodreads, if you want to connect there. It’s a great place to discover new books based on what your friends are reading.

Keep Reading:
Mother's Day: How Would You Like to Be Remembered?
What to Read Next: Goodreads Recommendations Can Help
A Discount on All WordPress and Facebook Services
Happy Holidays 2011