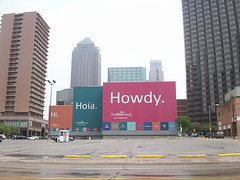 In the top right of the admin bar in the WordPress admin, it says Howdy and then your name. I’ve never really paid much attention to it except when I want to log out and having nothing against the word Howdy, but some people want to change that text to say something else.

Here are some plugins that will allow you to do that.

Does the howdy text bother you? Do you even notice it?