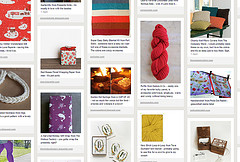 I’ve been hearing more and more about Pinterest so I decided to take spend some time with it over the last couple of days. It’s very addictive and it seems to be a social commerce site. And the commerce part seems to be working because one of the first images I clicked on was an item for sale on Etsy that was a perfect Valentine gift for my daughter, which I purchased. This intrigues me because I am not a shopper – I tend to think I have what I need, don’t want new clothes, don’t feel the need to upgrade my gadgets, etc. The only thing I willingly shop for is books. Anyway…

I decided to see what WordPress resources were available for Pinterest. Here’s what I found.

Do you use Pinterest? What do you think of it? Have you added any Pinterest plugins to your site?