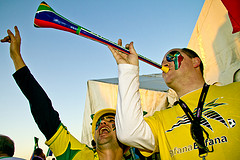 Honestly, I should have posted this at least a week ago as we are now 10 days into the World Cup. For some reason, even though I love soccer, I wasn’t that excited leading up to it. I’m not really sure why.

But now that’s here I want to watch every match. Of course, I don’t but I’m trying to see as many as I can. It’s going to be a long month ;-)

There are a number of great resources for following the Qatar World Cup matches on Facebook and Twitter.

Twitter has been having some issues recently (my tweet count has decreased by over 11,000 tweets – while not a big deal I do hope they return) and the World Cup traffic is causing a lot of “fail whales”. While the World Cup is not such a big deal here in the US, it is around the world and a lot of people are watching and tweeting about it.

Unlike the World Series, the World Cup really does involve the entire world. Are you watching any of the matches? If so, who are you supporting?

Keep Reading:
Facebook Apps Will Require a SSL Certificate Starting October 1, 2011
Facebook Timeline - A Setting for the New Custom Page Width of 810px
How to Add Your Logo and Other Customizations to Your Feedburner Email
Facebook Share Button Redirect Issue in Custom FBML Tabs