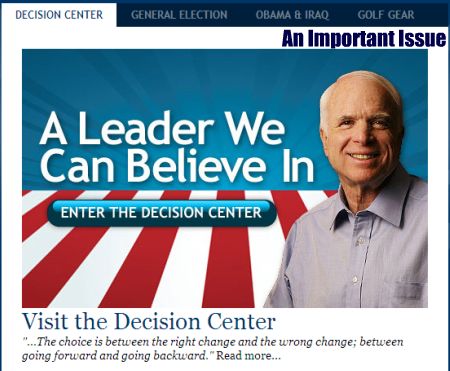 Apparently an important issue facing the Republican candidate for President is Golf Gear.  As you can see from this screenshot taken from John McCain’s website emphasis is placed on Decision Center, General Election, Obama & Iraq and GOLF GEAR.  Now I understand that McCain is a senior citizen and that he is from Arizona and that he is a Republican and that golf appeals to members of all three groups.  The Golf Gear issue is not going to assist in getting the votes of young voters, minority voters or Hillary fans.

I am not a Republican but I lived in Arizona for ten years and I have golf experience.  But I wasn’t golfing, I was working at a snackbar.  My first job, during the summer when I was 12 and 13, was at the Snack Shack, at a golf course in New Hampshire.  My primary duties were selling hot dogs and sodas and dealing with assholes.  I have had a lot of crappy jobs.  In fact, I am the queen of crappy jobs.  I have cleaned hotel rooms, answered phones for a cab company, and worked in tech support.  But golfers are the nastiest, most condescending pricks I have ever dealt with.  One day it was 95 degrees and sweat was dripping off of me while I cooked hot dogs over a gas grill.  A group of golfers came into the snack bar and one of them asked, “Are the hot dogs hot?”  Are the hot dogs hot?  Are you freaking kidding me.

Considering that golf is a sport of the wealthy, golfers were the worst tippers, the absolute worst.  I was young and wanted to do a good job and was treated like an idiot and a servant.  I’m surprised I wasn’t turned off work for life.  Well, actually, I think I was but the need for money caused me to keep going.

So John, Golf Gear is not going to help get my vote.  And my guess is that so many people have crappy jobs, like caddying your clubs, that you aren’t going to get their votes either.

Seriously John, I lived in Arizona.  You were a good senator.  I might have voted for you in 2000.  You were a different sort of Republican.

I respected what you went through during the Vietnam War.  Hell, if you stop the sale of your soul, my friend Jim will buy you a Top Gun t-shirt.

If you really cared about the environment, you would know that a golf course IN THE DESERT where there isn’t any water is probably not a very green choice.  At least not as green as the room where you gave your speech the other night.

And John, don’t you realize that your buddy George has given up golf in order to support our troops.  Oh wait, no he didn’t

Keep Reading:
Slightly Awkward Family Photos
Happy Muppet Memorial Day
Get Those Kids off My Lawn
8 Things I Don't Miss About Working in an Office