I installed Netlimiter 2 Lite, which is a free program to monitor your network and provides statistics for bandwidth usage. I used the Internet normally for a week, between 6/18/2008-6/24/08, and then took a look at my usage. I surfed, downloaded a couple of programs, watched a long soccer game online, torrented one file, worked on this website, and watched some clips on Hulu and Youtube. I do not play online games and did not watch any streaming movies or download any large files, such as a 4 GB linux distribution. It was, I believe, a standard week of usage for me. I’m not one of the heavy users that the ISP’s are concerned with but I believe my usage is higher than the average. I am, however, the only user of the internet in my household, I don’t run my own business and I don’t telecommute. On Monday through Friday there is at least 10-12 hours that I am not using my connection and because I am trying to reduce my energy consumption my computer is almost off during that time as well. 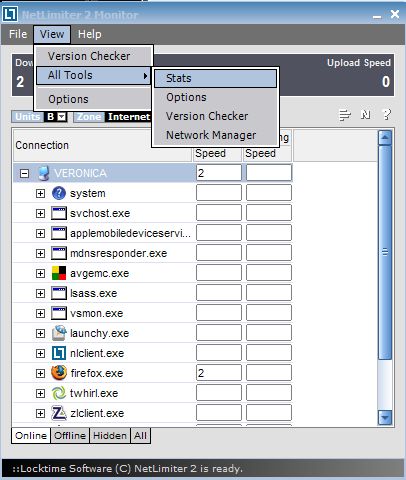 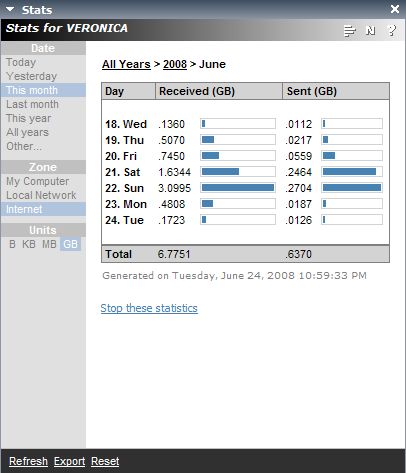 I was a little surprised by the results because I thought my usage would be higher. I’m not sure why I thought this I just expected higher numbers. My usage averages out to just over 1GB a day, which is 30GB per month. Nothing extraordinary that is going to push me into a expensive pricing plan. The 3 GB on Sunday, however, does concern me. If I were to work from home, watch a movie online everyday or share my connection with other users I would probably be between 3-5 GB per day or 100-150 GB per month. I would still fall within the limits of Comcast’s plan but would be paying way too much on Time Warners’.

It is also possible that this was not a typical week of usage for me although I do think it was. I am going to continue running Netlimiter 2 and then recheck my usage after a month. This will probably provide more accurate statistics anyway.

There are a number of issues the ISP’s need to take into consideration when developing the pay per usage pricing structure.

I will provide an update to this at the end of July when I have gathered and analyzed a month of data.