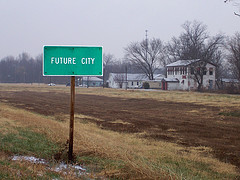 If you schedule your WordPress posts and want your visitors to get excited about what’s coming soon, you can list them in your sidebar.

I always schedule my posts and frequently write 5-6 posts at a time when I have a block of time and schedule them over the next couple of weeks. I get a little stressed out if I don’t have something scheduled and have to write something the night before. Anyway …

I don’t think I would use this feature because I don’t want to spoil the surprise. This is probably why I didn’t want to know the gender of my child when I had an ultrasound ;-) But, for certain types of sites, I think this could be a really useful feature.

There are two plugin solutions and one code solution. And even though I don’t want to use this feature I went ahead and tested the plugins. Yeah, you can thank me later.

This code snippet is from WP Recipes and takes advantage of the attribute post_status=future. This can be used on a template where you want the posts to be listed. It will work in a Text Widget if you are using a plugin like Exec-Php, which allows code to be run in text widgets. (I tested it.) It will also work in a non-widgetized sidebar.

I tested both of these plugins because they hadn’t been updated in awhile and they both worked fine. I did find, however, that they don’t like being activated at the same time. When they are both active, the widget for only one of them shows up in the list of widgets. Maybe they are too similar.

This plugin creates an Upcoming Posts widget that works much like the Recent Posts widget. You can give it a title and select how many future posts will be listed. And that’s it. 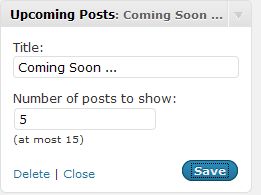 I found that the list of upcoming posts was styled differently than my other widgets – the lists of posts was bold – so, if I were going to use this I would have to tweak my stylesheet a little. I don’t know if everyone will experience the same issue or not.

This plugin is much like the previous one in that it adds and Upcoming Posts widget. This one, however, has more features than the first one. 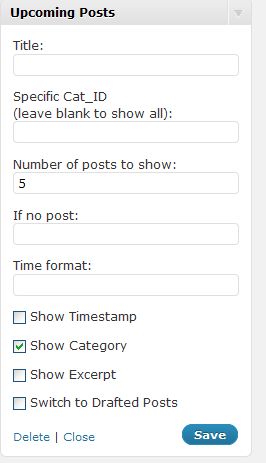 You can give it a title, select how many posts will be listed, display upcoming posts from a specific category, include a timestamp, include an excerpt, and more. If I were going to use these plugins I would probably go with the this one because of the additional features but there are instances when the simpler one would be sufficient.

Do you schedule posts? Would listing upcoming or future posts be useful for you?

Keep Reading:
How to Setup Multiuser in WordPress 3.0
Related Posts Account Suspension
Converting a Static Website to WordPress: Mary Shelley and Frankenstein Part 1
How to Add the Post Thumbnail Feature to your WordPress Installation