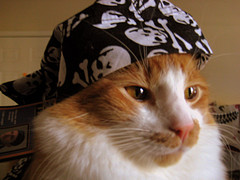 Last weekend was Alex’s 8th birthday. She had a sleepover party with 4 friends and a sort of pirate theme.

She knew she was getting a new bike because she had outgrown her old one and we ended up getting it at the end of May. But I also wanted to get her a little surprise. About 6 weeks before her birthday I had no idea what she was really into. I know she likes to read, play with her dollhouse and do arts and crafts but other than that I didn’t know if there was something that she really liked. Of course, then I doubted my parenting abilities but between school, activities and the time she spends with her father we don’t have all that much time together.

And she told me that she really likes pirates and adventures. And I was like when did this happen – when did we go from princesses to pirates? I was thrilled because I really can’t stand the ubiquitous Disney princess crap.

Other than that book almost all pirate books and activities features boys. I guess this makes sense because not a lot of girls are into pirates but I was frustrated that I couldn’t locate something like that perfect book.

I did finally locate Pirate’s Log: A Handbook for Aspiring Swashbucklers. And she loves it – it’s a sort of journal with pirate activities like making a pirate name, naming your ship, and arts and crafts.

A couple of weeks before her birthday she wanted to sew a pirate skull onto a bandana and make a sort of pirate hat. 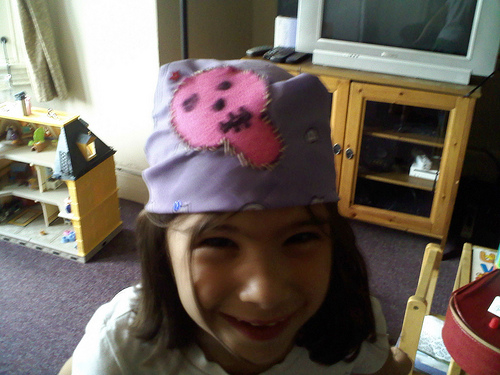 She’s still a girl, though, because she made it pink and purple. ;-)

We had a treasure hunt at her party but apparently I don’t know how intelligent the girls are because they told me it was “too easy”. I think a thank you would have been more appropriate (this leads into a whole train of thought about the choices children have, how they express themselves a little too much and need to learn how to be good guests but I suppose that will be for another time). Part of the treasures were bandanas so the other girls could be pirates but only one other kid was interested. She did, however, put it on and left it on the rest of the time she was here – lol.

Alex had a great birthday, I’m relieved the party was over and I’m going to keep trying to find ways to encourage her new found interest. Anything to avoid the girly stuff.

The two books are affiliate links.

Keep Reading:
Slightly Awkward Family Photos
Cleaning Up Old Backups (and other files)
How I Live Car-Free
5 Words or Phrases I Don't Want to See in my Email