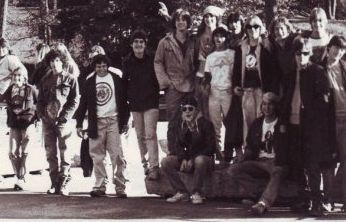 Ok. I’ve avoided memes to this point but since Ari Herzog tagged me to participate, I will. I’m trying really really hard to get on Ari’s A List without having to actually meet him so I’m hoping that meme participation will help me out. Now if you didn’t get the sarcasm in that last sentence that’s because a) I’m a crappy writer and b) html still doesn’t have the sarcasm tags which I’ve been waiting for for a VERY long time.

What am I talking about here? Oh yes. 7 things about me. I’m saying they are secret(ish) because people who know me, know these things, but I guess the online world doesn’t. So, buckle up because this should be a total thrill.

And now I am supposed to tag 7 others to participate. So, I’ve selected Jim Rocco, Mike Nichols, Tim Brownson, Carla, Stratos, Dave Wilkinson and Tracy O’Connor.

Note: I am in the photograph at the top of this article, if that wasn’t clear.

Keep Reading:
4 Things I Find Difficult About Solo Parenting
How to Encourage Kids to Read More - NOT
Vacation