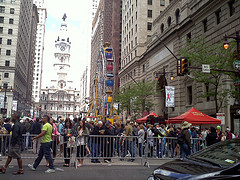 I was surprised to discover that I hadn’t posted anything in over 10 days. That has never happened before unless I have been on vacation and usually I schedule posts in advance so there isn’t a long gap without any new articles.

But, I didn’t have any posts scheduled and real life became so busy that I wasn’t able to get caught up. Well, it’s actually been a combination of busy / lazy / lack of inspiration.

My father came for an unexpected visit two weekends ago and I’ve been thrown off ever since. Well, mostly unexpected. Over a month ago he mentioned that he was doing a cross-country trip and might stop in Philadelphia (my father lives in Texas). Since he didn’t say anything about it again, the possible visit slipped my mind and I was really surprised when he called on a Friday and asked if it was better if he came on Saturday or Sunday.

Of course I was really glad my Dad was coming but I like to have everything scheduled and planned. It took me half a day to adjust myself for a different weekend. And, then realized I would need to clean up a little and get some groceries.

My Dad and I love each other but we aren’t super close – I mean we don’t see each other that often (I’m not that inclined to go to Texas). We hadn’t seen each other in 7 years – the kid was only 2 the last time she saw him and didn’t really remember him. She was a little nervous but took to him right away, thought he was really funny and didn’t want him to leave. And I remembered how easy my Dad is compared to other relatives – he’s happy doing anything – you can take him to a museum, out to eat, a comic book convention or the roller derby. My Mom was not that easy to entertain.

We went to the Da Vinci exhibit at the Franklin Institute – the kid has wanted to go so having a guest increased my motivation. It was wonderful and I learned that Da Vinci had the same birthday as my Dad. I also saw a Planetarium show about Black Holes, which I thought was really interesting but the kid was a little scared and my Dad was dozing ;-)

I’ve also been a lazier than I usually am. When I’m not working or doing family stuff, I haven’t felt like writing posts – I’ve mostly been reading and am actually way ahead of my goal of a book per week for this year. I think I’ve been a little worn out and have bit of spring fever, which I don’t remember really having since high school. Lazy probably isn’t the right work – I’ve just been working a little less and doing non computer related activities in my down time.

Normally, I have SO many ideas for posts that I don’t even manage to write them all. Lately, I haven’t been. I think that means it’s time to take a bit of break and recharge a little. Even this post is one about why I haven’t posted anything.

Thanks for sticking with me and for your support. I’ll leave you with the kid enjoying Fatboy Slim. ;-) I think I need some of that energy.

Keep Reading:
Get Those Kids off My Lawn
Looking for Scarlet's Walk Sheet Music by Tori Amos
What Should I Read Next? Books Read the 2nd Half of 2010
Can anyone follow instructions?